Now that Easter is approaching, refresh your memories from yesteryear and store these facts for a conversation around the Easter Sunday table!

The Easter bonnet tradition most likely began in Europe but it wasn’t until after the Civil War that the tradition became popular in the United States.  The first Easter after the Civil War was called the “Sunday of Joy”.  Women and children traded in their black clothes associated with mourning for beautiful pastel colors.  These spring colors indicated a new beginning, a rebirth.

Parades became an annual tradition in the United States in the 1880’s and continue to be well-attended today.  The popularity of Irving Berlin’s song, Easter Parade, was heard loud and clear in 1948, when over a million people flooded the streets of New York City for the annual celebration.  Although it was first sung in 1933,  Judy Garland and Fred Estaire’s 1948 rendition became the classic holiday song when they performed in the musical Easter Parade,

🎶In your Easter bonnet, with all the frills upon it,🎶

🎶You’ll be the grandest lady in the easter parade.

🎶I’ll be all in clover and when they look you over,🎶

🎶I’ll be the proudest fellow in the easter parade.🎶

🎶On the avenue, fifth avenue, the photographers will snap us,🎶

🎶And you’ll find that you’re in the rotogravure.🎶

🎶Oh, I could write a sonnet about your easter bonnet,🎶

🎶And of the girl I’m taking to the easter parade.🎶 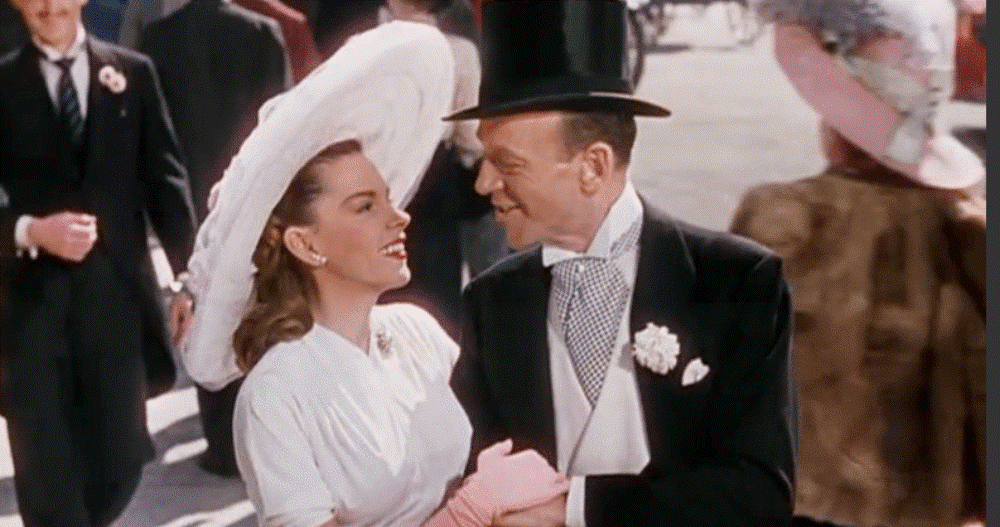 And just what is rotogravure  in the 6th line of the lyrics?  As the Library of Congress states on its website, “rotogravure printing allowed newspapers to bring high quality illustrations to the masses.”  These sections displayed fashion, the arts, well-known people and advertising. It was like having Life magazine folded into the newspaper.

One special part of the holiday parade was that everyone dressed to impress. Women would try to outdo each other with their best bonnet. A new hat for Easter was a simple luxury that many people valued. As bonnets evolved, creativity skyrocketed to include stacks of eggs balanced on heads as well as fruits, flowers, ribbons and nearly everything you could imagine.  And elaborate bonnets are still valued today especially by the British Royal Family.

Easter egg hunts for children became wildly popular, but did you ever hear of Egg tapping?  In this game, two children use their dyed hard-boiled eggs from their Easter baskets.  Using the pointed ends of the eggs the children knock them together until one cracks. The winner is the person whose egg has cracked the most eggs!  Marksville, Louisiana takes the event very seriously!  They host an annual official egg tapping competition, complete with strict rules and regulations. Winners must prove their eggs are not fake by breaking and eating them at the end of the event.

Ashton Place wishes you great new beginnings for a wonderful year ahead!

For more interesting reading about the history of Easter, click on the sites below:

Digital or in-person, see if Ashton Place is right for you

Read the latest blogs from the staff at Ashton Place.

Have a question or need some help? We're here for you.

Get our free guide, "Caring for Aging Loved Ones Made Easier".